CD Review on All About Jazz

Don't be fooled by the innocuous cover illustration of a ballet dancer in motion; look closely, and it becomes apparent that the woman is being snatched by a shadowy figure in a hat. The music of YT little d is like that, too--safe and easygoing on first impression, until leader Yuka Tadano and her cracking band unleash enough fireworks to light up Times Square.
Robert Verastegui's toe-tapping piano and Tadano's throbbing bass lines open up ”Simple Logic” with a solid sense of rhythm, but no hint of the blast of breathtaking energy to come. Only when the horns kick in, and drummer Stockton Helbing makes his fiery presence known, does YT little d truly gel. The group's chemistry is intoxicating, and as the opening track continues to unreel, the band revs into high gear, pushing forward to a sweltering, hypnotic jam. Tadano and her group work as a team, each complementing one another. Nobody tries to steal the spotlight--although, throughout the record, everyone is given an opportunity to shine.

On the title track, Tadano's bass is subtler, conjuring images of footsteps among the CD's few truly mellow moments. Its dreamy intro proves that the band is capable of balancing different tones. The hauntingly pretty melodies that follow, anchored by Verastegui's lush, lovely piano, heighten the album's emotional connection, the song moving as gracefully as its subject, but with an increasing intensity that is both gripping and dramatic.

Helbing's ferocious, slamming drums propel “Paid Day Off” and “Falling Down” to thrilling highs. In fact, Helbing's explosive drumming at the conclusion of “Falling Down” punches through the speakers like bolts of lightning, a song worth it for the ending alone, when Helbing is given the chance to close the show with a knockout walloping of his skins. The finale, “Kekkaishi,” is appropriately named; translated from the Japanese, “Kekkaishi” means “barrier master,” more specifically, ”barriers of magic.” And it's magic that Tadano and her band produces here, weaving spells of harmony and musical brotherhood with their instruments.

Bassist and composer Yuka Tadano was born into a musical family in Ibaraki, Japan. While her early studies were on the violin, starting at the age of six, she eventually found her way to the electric bass at the age of 17. Moving to the United States to study at the University of North Texas (UNT) in 2004, she has since made the acoustic bass her primary instrument. In August of 2009 she was awarded a position at her alma mater as director of the 7 O’clock Lab Band.
She has worked with artists such as Marchel Ivery, Brad Leali, Shelley Carroll, Andrew Griffith, Stefan Karlsson, Armad "Benny" Medina, Blues Brothers Lou Marini, John Abercrombie, Bernard Wright, Quamon Fowler, Roger Boykin, Claude Johnson, Brian Piper, Mike Drake, Adonis Rose, Jim Riggs, and Andy Martin. YT little d, the name of her band, draws its name from her initials and the nickname of the town in which UNT is located, Denton.

Her debut CD, Dancer, features a five piece combo playing eight tunes by various members of her band. The style is decidedly in the Art Blakey post-bop frame. As a bassist Tadano is a rock, both in her conception of time and in the powerful lines she imbeds underneath the proceedings. On Brian Girley’s alto saxophone solo on drummer Stockton Helbing’s "Knows One To Take One," for example, Tadano both supports and provides vivid counterpoint beneath the saxophonist’s livid lines. Then on the closing melody she lays back, waiting to assert herself until the horn’s lines build. Her growing strength through this section helps to push the work to an appropriate climax.

As a composer she has a smart feeling for proportion and a keen arranger’s ear for how lines and solos can intermix. Her composition, "Dancer," is a case in point. By creating a melody and countersubject that is open and free, yet pinned to a ballad time frame, she is able to interweave Roberto Verastegui’s exquisite piano solo to horn lines in such a seamless fashion the result belies her young age. It would be interesting to hear her work as a big band arranger.

What sets this debut apart from many other first releases by young jazz artists is the group mind-speak demonstrated throughout the disc. Even with so many different composers all given compositional space, the overall empathy they exhibit in writing for the talents in the band is of a singular mind. Unless one checked the liner notes the listener would not be able to identify which composers penned which tune. This concept of a singular artistic voice within young jazz combos is rare, and, for sure, to be celebrated here. While the soloists are young and definitely need some seasoning, there is no doubt they will be greatly aided by the opportunity to grow within the confines of an actual working band. Watching the progression of these young artists will be fascinating.

Interview on RakuRaku Press in Shanghai 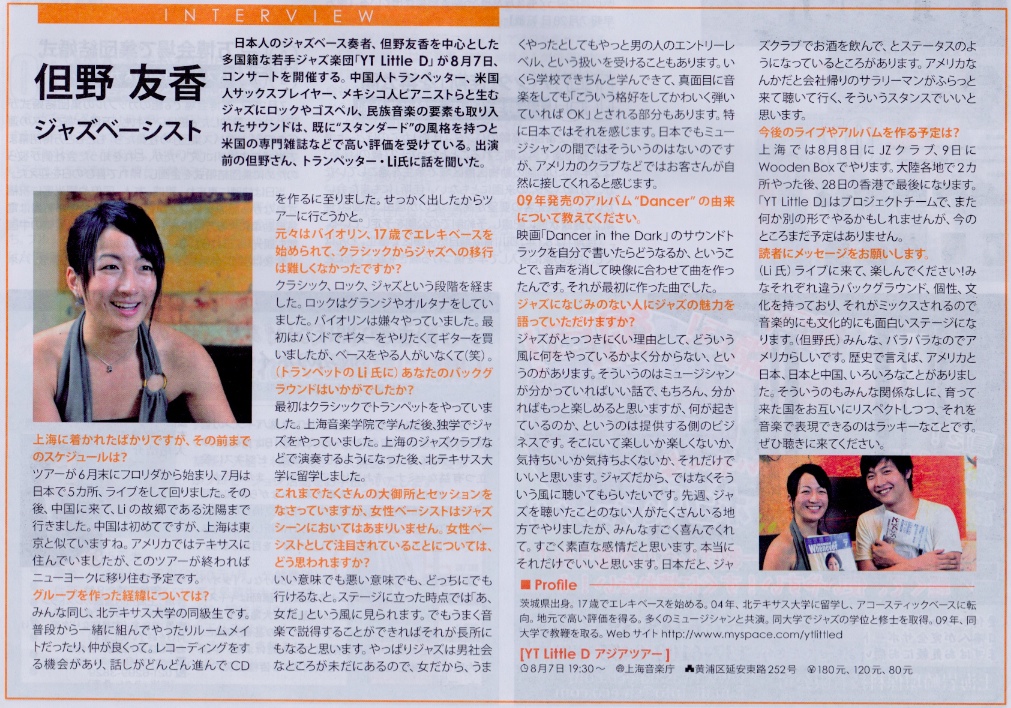 Interview on musicmusic.com in Hong Kong